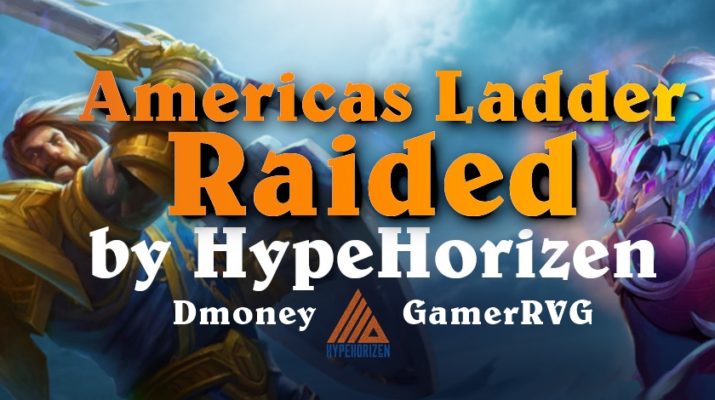 Yesterday at 11:55 PM PT, the Americas ladder for June locked forever. After the dust settled, HypeHorizen’s Dmoney and GamerRvg finished on the front page of the leaderboards.

“I was warming up on Europe, and then I was gonna go over to the Americas server to climb because I had dropped to rank 17 or 18.”

Three days prior, Dmoney was rank three. He hoped to camp that rank and finish top 16. However, after warming up with some Priest games on Europe, his Americas account had fallen to rank 20.

“I did drop more than I expected. I was hoping to be fine at rank three and I wouldn’t have to play at all, but I was prepared for a battle.”

However, despite practicing Priest, Dmoney accidentally queued Reno Mage. After 28 minutes, having zero to one cards against his opponent and being two damage off lethal, fatigue was going to perfectly kill Dmoney.

But, as a final act of RNG, Reno cast Holy Ripple, healing Dmoney one health over lethal and securing him the game.

After the mistaken queue and grueling game, Priest took the reins. Twelve games later, Dmoney found himself sitting at rank five, ending his last day on the Americas server at 9-4, locking at rank seven and securing his spot in Hearthstone Masters Tour Online: Montreal. It will be his first Masters Tour.

“This is just the first step of the journey. The next step is taking home this Masters tournament, or at least getting to day two/ day three.”

GamerRvg started his climb a day earlier at 9:00 PM CT in rank 50. Fourteen hours later, with no sleep and almost exclusively sitting at his computer, he was rank 81. It was time to change to Egg Warrior.

What ensued was another 14 hours of nothing but Egg Warrior. Save for short breaks on YouTube and Twitch, GamerRvg kept grinding. Even for food, he’d eat by his computer and resume climbing after eating.

After going 42-24 over 14 hours, GamerRvg only had 45 minutes left. He got up for a restroom break and when he came back, he made one final switch: Tempo Demon Hunter.

In less than an hour, he managed to complete nine games, going 7-2, killing opponents as early as turn five.

On game nine, GamerRvg was rank 18 facing the rank 17 player. He won, but despite that, he only finished rank 17. As additional salt in the wound, the game ended at 11:58 PT, three minutes after the lock. The ladder registered him at rank 19 Americas.

“But it’s happened before. I’m not too concerned or upset about it really because I have full confidence in myself that I will still qualify for the tournament, whether it be through the qualifiers or just ladder next month.”