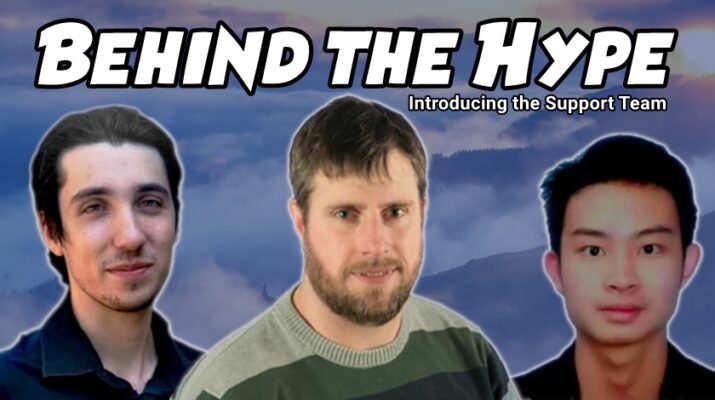 However, there’s a lot more than streams and memes. We’ve got a ton of talented people on the team that keep the hype train chugging along. We’ve got GuyGrumpy, VengaDragon and DmoneyGames conducting various parts of the train. We’ve got our stream team serving the proverbial food and beverages to our passengers. We’ve got our competitive team charting the fastest routes.

And then sometimes, the train does something unexpected. Sometimes it just makes a funny sound, and I report on it so our passengers can get the latest hype news. However, sometimes it’s not just a funny sound and the train needs some oil for the brakes or some coal for the engine. That’s where our engineers come in.

I wanted to do my section first and keep it short because I get to already do this multiple times a week. I already get to write about myself or whatever I feel like online. I also get to interview amazing people like national awardees, world champions, and some kid named GamerRvg.

Rvg as I call him, popped into my Twitch chat a few years ago spamming the “:)” emote. I got to know him, follow his career, almost hospitalized him at Masters Tour Arlington because he forgot he had a shellfish allergy, and I’ve been super invested in his success.

Then, a few months ago, he made the mistake of telling me he joined a new team called HypeHorizen. I immediately spammed out interview requests via Twitter to anyone he mentioned, including owner VengaDragon. After a two-hour interview with Venga and a few memes, I ended up joining the team and the rest is history.

Remember that nifty tournament we had last week? Well, Scarzzl was one of the people who helped set that up.

“I never thought that I would be hosting a tournament. That’s a really surprising factor ’cause I am an admin; I’m not an event planner or anything. But still, it was really great to host an event and people enjoyed it.”

Scarzzl is our Discord Admin. He recently got into Hearthstone around the Ashes of Outland expansion. Then, a few months ago his friend raided Dmoney’s stream.

“I really enjoyed the stream. So when [Dmoney] announced they were making an esports organization, I said ‘oh, maybe here’s my chance to prove myself.’ I didn’t know what I’m going to be a part of, because I never moderated for such a high-caliber organization.”

“I actually gave a lot of feedback towards their Discord server… A few days later, GuyGrumpy messaged me and said ‘hey, we love your ideas. Do you want to be an admin for HypeHorizen?’ I was like ‘hell yeah!'”

ScarzzL is currently studying business management with the hopes to transfer to America and study international business. His dream is to be more involved in the esports industry, and maybe, with a bit of luck, start his own esports org to rival HypeHorizen.

But until then, this “high-caliber organization” is happy to help him achieve his dreams.

“When I like something, I tend to really get involved… I’m super seasoned in everything and I can pick up stuff super quick, which is what I do for my job as well. It just makes managing the Discord easy.”

SkaJohnny’s is our Moderator, but he tries to sink his teeth into anything HypeHorizen can throw at him, like the Thursday Night Throwdown tournament. He’s been working with ScarzzL to improve the Discord and bring you some juicy events in the future, maybe even some bigger tournaments.

The reason why SkaJohnny’s so involved is simple: he’s doing it for friends he cares about.

“I really like VengaDragon and GuyGrumpy. They’ve been really nice to me; they’ve been good people. I consider them friends even though we’ve never met face-to-face. Anyway I can help them, I would 100 percent do it, because I would do that for any of my friends… I just want to be part of the hype. I love the team, I love the guys. The people are amazing. Like, I’ve been really blown away at how awesome all the people that they’ve acquired are.”