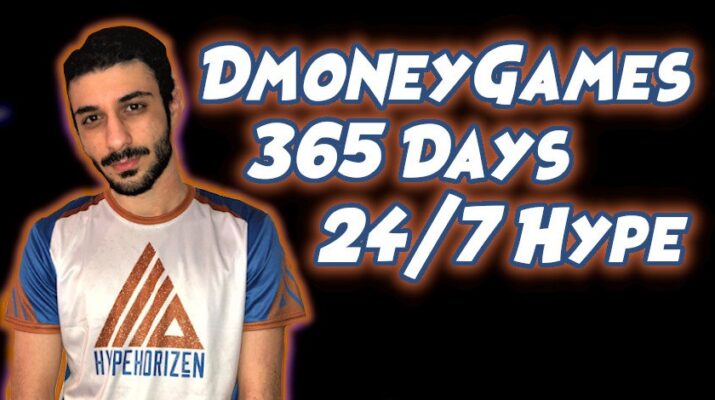 Today marks a special milestone for DmoneyGames: hitting 365 days straight of streaming. What did he have to say about this accomplishment? Well, he said that after attempting a 24-hour subathon today, he plans on streaming for another 365 days straight. The absolute madlad!

“After I hit the 365, I’m just going for another 365 because I don’t have any plans of stopping really.”

Dmoney always wanted to stream full time and he’s been streaming on and off for about three or four years. After losing his sales job and not finding any line of work that appealed to him, he decided to bet big on streaming.

“I was looking at other jobs that I could get and none of them were interesting to me. I just said one day ‘I wanna take my own path and try streaming one more time and see if I can do it, and this time, I’m fully going to commit.'”

A year later, he became a Twitch partner and even found time to outplay kids in Masters Tour Montreal.

Dmoney said the most important thing he’s learned that’s also borne in the data is consistency. And what helps him stream consistently? His passion for competition and streaming.

“I’ve always loved playing video games. I always tried to be competitive with every game I play. Like I never play campaign modes or anything; it’s just all straight ranked mode for any game that I play. I try to be the best. For streaming, I really don’t leave the house too much and I don’t really get to talk with too many people, so the interaction with people in chat has always been really cool. I love talking to people in general and having people watch you play is really cool to me because I get to display my skills and maybe impress some people or make a joke and make people happy or make people laugh.”

Dmoney’s come a long from streaming to three viewers on day one of his challenge. He said he’s constantly improving his stream and finding new ways to entertain his audience.

You too can help Dmoney improve his craft by watching his subathon starting at approximately 12:00 PM EST today. Last time he did a subathon, he ate wet cat food as one of the rewards, so who knows what he’s got planned for this one.