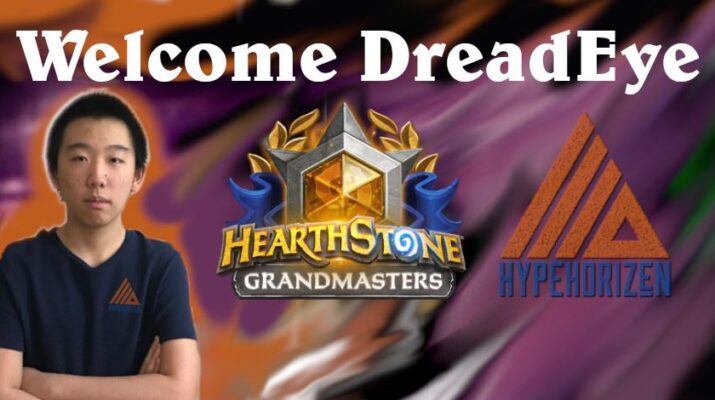 From Free-To-Play To Grandmaster: DreadEye Joins The Competitive Team

Without spending “a cent” on Hearthstone, high school junior Dreadeye made what some, including possibly himself and GamerRvg, would call a miracle 8-1 run at Masters Tour Montreal. Dreadeye tied for 3rd and is now officially a Grandmaster.

Hi, I’m DreadEye. My history with Hearthstone is basically in the middle of 9th grade, literally all the sophomore boys on my badminton team were playing Hearthstone. School is stressful. You need some game to calm yourself down.

One guy named Inha Bae mainly got me into Hearthstone. He motivates me by [jokingly] saying stuff like ‘dude, you’re so bad. You’re misplaying every turn; oh my God.’ And now I’m like ‘well, maybe you make it into GM friend :).’

What games do you stream?

I stream Hearthstone. I go on, talk to people, just chat a bit.

When I started the game, deep in my heart, I knew what to do whenever a turn starts. I just have the feeling of what I should do there. There’s times when two plays are correct. Like two plays look correct in the first place. But then if you take a look deeper, then one is just strictly wrong compared to the other. To me, I can’t really explain what’s wrong about the other play but I know the other play is incorrect. It’s like a really weird feeling. I don’t really know how to describe it.

But I was born in China. I came here at 12 years old. I’m technically not allowed to make money from Twitch. So I’m not qualified for the Affiliate or Partner Program because I’m holding a student visa. Maybe later on I’ll go to work and get a work visa, then I can do everything.

What are your thoughts on joining the Competitive Team on HypeHorizen?

It was like the end of August and I got into a game with GamerRvg. We talked as we played. He was like ‘oh hey, what are you doing for the Masters Tour?’ I was like ‘I have a lineup in my mind, but I have no one to practice with.’ And he was so nice that he invited me to the HypeHorizen Competitive [Discord] Chat. And then we just started practicing.

During practice, it was funny because in the beginning, I decided to bring Pirate Warrior. And then Rvg was like ‘hey dude, if you bring that and you come out 1-3, I’ll call that a “W.” Please don’t bring that crap. Take Turtle Mage. It fits your lineup.’ He took five minutes and built me a list.

I pulled an 8-1 and after that, DmoneyGames said they wanted me on the team.

On this team, I’d like to help, win Team Hearth Legends, and make myself a good representation at GM. I’d like to just give more than I get.

What are your goals now that you’re a Grandmaster?

Experience wise, compared to players, I’ve been playing this game for less than two years and the Masters Tour was basically like a one-time popoff. Other players would say I’m basically exploiting the system. People are like ‘this guy just high rolled.’ I mean, that’s a possibility, but to high roll to the point of 8-1 and make it to the semifinals, it’s pretty unlikely. There has to be some skill in there.

My goal is to stay in GM, do well in it, actually let the audience watch watchable games instead of just me misplaying, you know? There’s not a single goal I want to get. It’s not like ‘oh, I wanna get world champion.’ I don’t have that goal yet. I’ll try my best. If it goes there, it goes there. If it doesn’t, I won’t be mad. I think I wanna just keep it up at this point.

Also, I did not spend a cent on this game until now. With the new expansion, I think I’m gonna start to spend some money because I got into GM, so I’m gonna get the starter bundle. I’m gonna start inventing decks of my own because back then, I didn’t have cards, so I couldn’t really create anything. Right now I can finally start inventing stuff and seeing if there’s any meta breakers. Now I can start spending.

When I grew up, gaming was something literally almost illegal in my household. Because you should focus on school because you’re a young person. You should educate yourself instead of playing those time wasting, eye-destroying games.

Maybe I’d sneak 30 minutes of gaming every once in awhile.

Before I played Hearthstone, I played quite a lot of Fortnite. The Fortnite World Cup changed my opinion a lot.

Bugha just literally popped off. He finished almost two times higher than other players. With that, he got so many more viewers on Twitch, and he basically changed his life with it.

That’s when I was like ‘oh wait, games can actually do something for your life.’

Bugha is really the person who inspired me to start on this path. I tried hard and did it.

I really agree with “you get what you deserve.”

People, if they hear that, they’re like ‘what the hell? That’s absolutely not correct in Hearthstone. They play a Prime; you don’t get what you deserve.’

There’s something weird I noticed about Hearthstone. It might be just a feeling. There’s no data to back it up. Back then when I was trying to qualify with Highlander Hunter, if I played the game right and I noticed [my opponent] definitely played something wrong, later on if I went into a desperate spot where there’s like two life-saving top decks, I could always top deck them.

It’s really weird. It’s like the game knows which side played better and tries to give them the win with the top deck. It happened so much I was like ‘wait, is this game programmed by Zephyrus?’

You can’t really blame RNG that much because if you play well, eventually results will come. That’s the best way to describe it.

One thought on “DreadEye Joins The Competitive Team”