Meta Overview
Polarization has been heavily discussed when referring to this standard meta. We have seen this rock-paper-scissors style metagame previously, but it seems to be taken to a bigger extreme with some of the most powerful decks. With the addition of Kazakusan, luck of the draw and matchup queued are at an all-time high. While the duels treasures in standard add more variety and “fun” elements, it also causes for more frustrating losses.

Best Decks
Kazakusan Druid is one of the most powerful decks in the game because of its ability to cheat mana for quick treasures in the deck. It does however struggle heavily to aggressive decks with its lack of early game removal.
Burn shaman sits atop this tier list due to its ability to consistently develop tempo, draw a multitude of cards, stall out an opponent’s board-based plan, and of course burn down your opponent very efficiently. This is one of the few decks that has a lot of game against almost every deck in the game besides control warrior.
Owl Warlock is still around and as strong as ever, running mithril rod at 5 mana and not giving a hoot! (Sorry) This deck is the best at what it does, staying alive while drawing its combo at a very fast pace. This makes it the most powerful combo deck in standard, and shows with its consistent results in Masters Tours, ladder and Grand Master.


Closing Thoughts
The meta will likely remain relatively stagnant until the yearly rotation and new core set with the addition of the first set of the year this April. Until then, Masters Tour 2 and Grand Master will be running in the following weeks. We hope you cheer on our very own Grand Masters McBanterFace, DreadEye and GamerRVG as they battle for a spot in Worlds!
-Dmoney 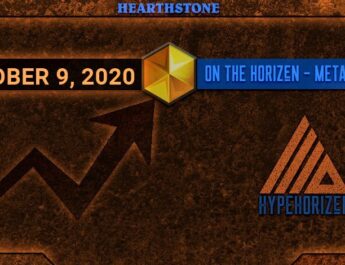