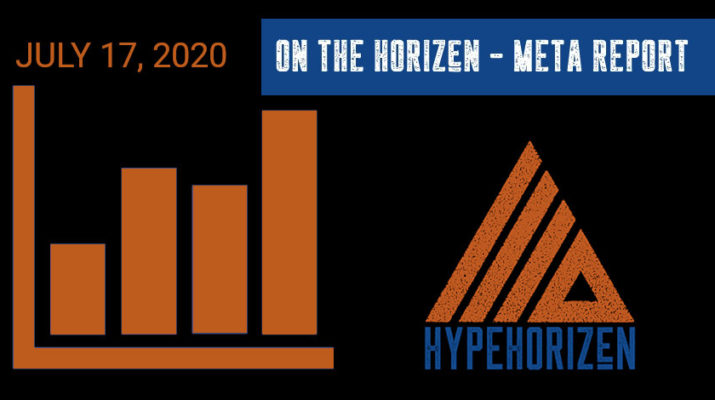 Welcome to On the Horizen, your one-stop-shop for articles written by Hype Horizen members. This week features insights from coolkid2001.

The Hearthstone Meta Report contains everything you’ll need to know about the current standard meta, as seen through the eyes of the Hype Horizen competitive team. You can expect high-level insights on the meta as a whole — and some tips for how to maneuver through it.

PLEASE NOTE: All information has been based on personal experience and personal statistics gathered through many hours of high-level gameplay.

The meta has shifted quite considerably since last week’s meta-review, due to the balance changes that went into effect on Tuesday. As a result, we saw considerable changes to Demon Hunter and Rogue, as well as changes to key cards used by other classes — Corsair Cache, Fungal Fortunes, Dragoncaster and Dragonqueen Alextrasza.

With these balance changes coming into effect just a couple of days before Masters Tour APAC Online, many of the top players participating in this tournament had to completely shift and change their lineups.

With the Masters Tour running July 17 through July 19 we will get a general idea of whether any of the previously top decks (notably Tempo Demon Hunter and enrage warrior) will continue to dominate the meta.

The July Nerf Effect on Meta

On the other hand, will recent Nerfs allow other Tier 2 and Tier 3 decks to move up on the Meta Tier List?

We see massive changes to the win rate of classes compared to last week. We saw significant drops in win rate for Demon Hunter, Warrior and Druid, and improvements in win rate for Paladin, Shaman and Warlock.

With less Tempo Demon Hunter and Warrior on the ladder, we see a huge rise in power level from decks such as Totem Shaman and Highlander Hunter. The only class that didn’t move in the win rate rankings this week is Priest.

The New Deck of the Week

Evolve Totem Galakrond Shaman: an intriguing deck that was, I believe, originally theory crafted by Jambre and recently popularized by BoarControl on his stream.

It uses the usual Galakrond Shaman shell with two copies of each invoke card available to Shaman. Playing two 8-8’s with rush and getting a 5-2 weapon on Turn 7 can win a game on its own in specific matchups. The “Evolve Package” is an excellent fit for this deck, as a lot of the cards that invoke are low-statted minions such as Devoted Maniac and Corrupt Elementalist.

The Evolve Package consists of cards such as Mutate, Bogstrok Clacker and Boggspine Knuckles. Paring any of these cards with under-statted minions (or more specifically Mogu Fleshshaper) can result in a completely devastating amount of stats on board.

Boggspine Knuckles, in particular, can set up substantial board swings – if you equip it one turn, and play Galakrond the next (even just for 4/4 minions), you can trade them into opponents minions, and evolve them. If you can follow that up with Kronx Dragonhoof, you can straight up lock opponents out of games.

The mulligan for this deck is relatively flexible; however, we can keep Far Sight most of the time. Other than that, we want to look for combinations of cards such as totems and Totemic Reflection. Keeping Boggspine Knuckles can be decent against slower decks. Against Demon Hunter, holding your cheap invokes such as Invocation of Frost and Devoted Maniac can help clear the early board threats they put out.

This deck is a lot of fun and performs surprisingly well on the ladder right now, especially as most of the previously top decks are toned down due to nerfs.

This ‘best decks list’ is purely based on my personal experience on the ladder and my understanding of how the nerfs will affect the meta. Expect that the positions will change as each deck is tested and tuned.

Although we still see a lot of the same decks even after the nerfs, there is still a lot to explore in this updated meta. I feel like this meta game is truly balanced; it can just get a little toxic with all the randomness, and as the cool kids (not me) say, ‘scam’ potential floating around.

The fact that there are still deck concepts to explore this close to the new expansion (early August release) proves that Blizzard did a fair job keeping the metagame as fresh as possible.

Constant balance changes were really good for the game and brought an all-around fresh feeling, and I hope it’s something they continue to do with the expansion metagame in the future.