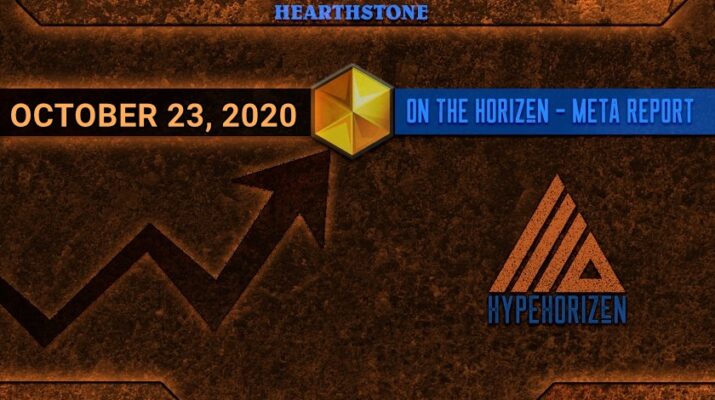 Welcome to On the Horizen, your one-stop-shop for everything to know about the current standard meta provided by members of the Hype Horizen team themselves! Every Friday, you can expect a detailed report on the meta as a whole, and some tips for how to maneuver through it. This will also be a hot spot for other articles written by team members. PLEASE NOTE: All information is based on personal experience and personal statistics gathered through many hours of high-level gameplay. This week is brought to you by Guygrumpy..

For the competitive player, the meta is largely changed from previous weeks.  However, at time of writing, there were a few balance changes that we are keeping our eye on.

The two cards that were changed on Thursday were Evocation, which was increased from 1 mana to 2 mana.  This was to address some concerns about the consistency that it was being generated by cards like wand thief, as well as it being played for free with a Sorcerer’s apprentice.  As a result, even if it remains as prevalent in decks due to the value it generates, you won’t be running into it multiple times per game as frequently.

Solarian Prime (the card generated by Astromancer Solarian) was increased from 7 mana to 9 mana.  This was done because when cast on turn 7 (as was often done), it was typically a swing that would end the game.  This change delays when it can be played, and reduces the number of cards that can be played on the same turn as it (a key because Solarian Prime could randomly fill your hand with cards).  Again, we don’t expect this to drastically change the meta — apart from just being seen a little later in games.

The final change is the addition of a free card to everyone who logs in!  Silas Darkmoon is a 7 mana 4/4 with the Battlecry: Choose a direction to rotate all minions.  While we do not expect this card to be included in competitive decks, you may run into an occasional player experimenting with it in a combo or control deck.

The new mode, Hearthstone Duels was announced on Thursday, with early access to the mode being granted to people who purchase one of the preorder bundles.  This new mode brings a Dungeon Run-like style to an Arena-like format.  Every round, you’ll play someone with a similar sized deck, and play until you either win 12 or lose 3.  With the preview build, a free “casual” version is available, but with release on November 17, a paid version will be available with new rewards.

In this mode, you get to choose one of 4 heroes to build a deck around.  They each have a unique hero power and treasure for the preview build, but more will be unlocked over time.  When deckbuilding, it is important to note that you will be required to pick 16 different cards for the initial deck, so it is easy to build around your initial strengths, which will then be augmented by further treasure and deck choices later.

Our tier list for the heroes is based on our impression of the strength of initial builds possible, the selections available in buckets, and the potential treasures that you can encounter.  Note that at this time, we are unable to build decklists for this mode, but if the mode becomes popular, we may occasionally make updates to these tier lists.

Fluctuating Totem (2) (0/3 totem) Stealth for 1 turn. At the end of your turn, evolve adjacent minions

HP: Deal 1 damage. If this kills a minion, summon a mana wyrm

HP:  Deal 2 damage to the enemy bero, then give a random friendly minion +1 attack

Slate’s Syringe:  (3) Steal 3 Attack and Health from an enemy minion. Give +3/+3 to a random friendly beast

Auto-Armaments: Whenever this takes damage, draw a minion from your deck and give it +1/+1

HP: Gain +1 attack this turn.  After you attack and destroy a minion, get a Second Slice

Summoning Ritual:  (4) Summon 3 demons from your deck.  They are dormant for 2 turns.

Warden’s Insight:  (3) Choose one: Refresh your mana crystals; or summon a treant for each mana crystal you have

HP:  Restore 3 health to a character. If it is still damaged, draw a card

Fractured Spirits: (5) Silence a minion, then summon 2 copies of it

HP: Summon a friendly minion that died this game with 1 health

Royal Greatsword: (6) After you attack, summon a legendary minion from your deck (6/3 weapon)