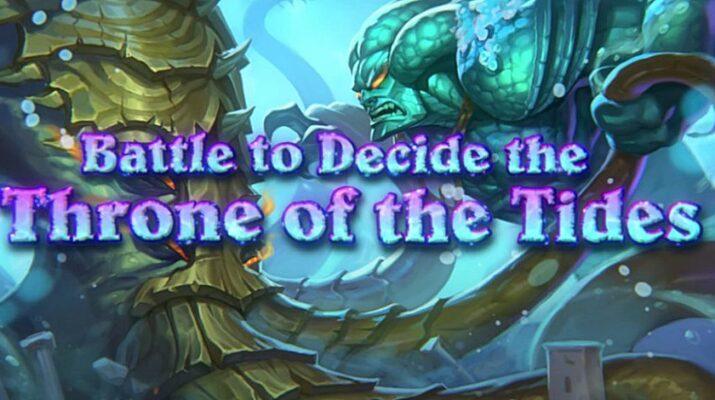 The Thrones of Tides Mini-Set released this week, expanding on the concepts first introduced in Voyage to the Sunken City.

The biggest mechanical change to this mini-set is undoubtedly the introduction of two new neutral colossals, Ozumat and Neptulon. Colossal cards were introduced in Voyage to the Sunken City, but remained class-specific until now. This gives every class three options for colossal minions, instead of just one.

Hearthstone teased the new collosals with this tweet depicting a fist bump between an octopus and a merman. This is probably a reference to the fact that both of the new colossal minions summon additional hands into the battlefield, giving the opponent the impression of entering a boss fight with a massive sea monster.

Ozumat summons 6 tentacles that destroy random enemy minions when Ozumat is destroyed, pressuring your opponent to take out the tentacles first. Ozumat is great for clearing your opponent’s board indiscriminately by triggering its Deathrattle early, but it provides less of a threat against opponents with open boards.

Neptulon attacks with two hands that are immune while attacking and each hit for 4, doing a total of 8 damage, slightly more than the 7 damage he would do on his own. It’s functionally similar to Onyxia, which might still be favorable in deck construction until it rotates out.

Other Cards of Interest

Outside of the new collosals, there are a few other interesting new cards in the mini-set. Many make use of the Dredging mechanic, which lets you choose one of three cards from the bottom of your deck, and move it to the top of your deck.

The neutral card Bubbler has 4 life, but dies if it takes exactly 1 damage. This means it can survive 2 or 3 damage, but not 1 or 4. This card has interesting interactions with the Druid’s Moonbeam card which deals exactly one damage, twice; it would pop the Bubbler but also do 2 damage to any other type of unit. Expect a lot of fiddly play around these guys.

The Hunter’s K9-Otron and the Shaman’s Tidelost Burrower both have the ability to Dredge upon entering battle. But they also get bonus effects when dredging specific cards, meaning you’ll have to construct your deck around these conditions to get the most out of these effects.

Warlock’s Immolate forces the opponent to play every card in their hand within 3 turns, or lose them. Warrior’s Clash of the Colossals adds a random colossal to both players hands, setting up an Ozumat vs Neptulon duel. Both of these cards could dramatically change the flow of battle.

The Priest’s Drown lets you put an opponent’s minion at the bottom of your deck, allowing you to Dredge them up on a later turn. The Rogue’s Jackpot! spell, as an incredible flex of RNG, gives you access to a random 5+ cost spell from other classes. It’s hard to imagine a coherent strategy being built around Jackpot! and it really seems like its primary use would be trolling.

Outside of the new Mini-Set, there also updates to Battlegrounds and Mercenaries game modes. Battlegrounds features the return of Diablo for one week only, and there will be a limited time Mercenaries event to unlock Y’Shaarj. There will also be a free mercenary in the shop, Tyrael, who can be claimed from now until the next major patch. You can read the full patch notes for Hearthstone Patch 23.4 to learn more.