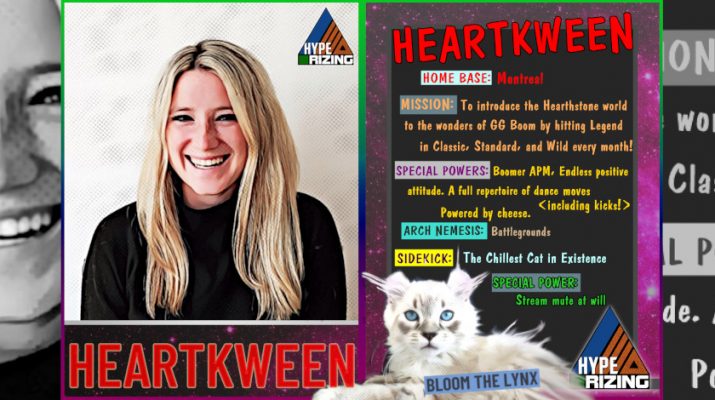 Hype Rizing is excited to announce their second Hero with the promotion of Heartkween!.  Heartkween is a triple legend (Standard, Wild, and Classic), and was recently highlighted by Blizzard in the Essential series, talking about the most exciting epic cards from the new set!  We had a chance to catch up with her to get to know her a little better.

Editors Note: Heartkween was promoted to the Hype Horizen Team on October 25, 2021.

How did you first learn of Hype Rizing/Hype Horizen?

I was looking at Dracocatt & Battmasile stream and noticed they were both on the same team. I was intrigued about it & I asked them how they liked their team. They were super nice and we had a long conversation about it. Next thing I know, I got an email from the recruitment team at Hype Rizing/Hype Horizen.

I stream on Twitch. A friend of mine recommended Twitch and I feel it’s super user friendly and very easy to start streaming on this platform. The HS community on Twitch is amazing. I’ve made some very solid friendships since then.

To be honest, Hearthstone is the only game I play. I started playing Hearthstone six years ago, because I was looking for a game I could play on my ipad that was a little more complicated than something like Candy Crush. I didn’t need a console to play it, which was very appealing to me. I got hooked completely and have played every day since, crazy right?

I don’t really have one. I’m quite new to the world of streaming, but if I have to say someone, I would say Slysssa. She was one of the first female streamers who I watched, after she kindly raided me during my first month of streaming. I really appreciated having a strong female role model, which can be hard to find in this industry.

Starting streaming was the best thing that could have happened to me. 2021 with the pandemic was super hard on everyone’s mood. Streaming was a new way to be social online. It was a real discovery for me. I’m so grateful to have found such an amazing community. So yes, the social part of it, without borders (from everywhere in the world).

Do you have a favorite mantra or quote that you live by?

Never give up, never concede! It’s relevant to life, but to the game also. People concede when they see obstacles. There’s always a way to outplay your opponent if you’re confident enough about it. Same thing goes for real life, perseverance is key. Nothing happens by magic. You need to work to get to your dream.

For everyone that knows my stream, it’s all about positivity. I really try to put a smile on everyone’s face when they come to my stream.

I work, I eat cheese, I drink coffee or I sleep  🙂 I stream full time & I have a full time job, so I basically don’t have time to do anything else hahaha.

Who inspires you? Have you met them in person?

Every female gamer/streamer inspires me, because it’s really not easy to be a female in this industry. It’s crazy the things that are said to you when you’re a girl.

What game(s) are you streaming?  What do you enjoy about it/them?

I only play/stream Hearthstone. It’s my favorite game of all time. With all the game modes, you have so many options inside the same game. It helps to keep things fresh. I also enjoy the community aspect of Hearthstone. Being able to share this thing that I love with so many people has been a blessing.