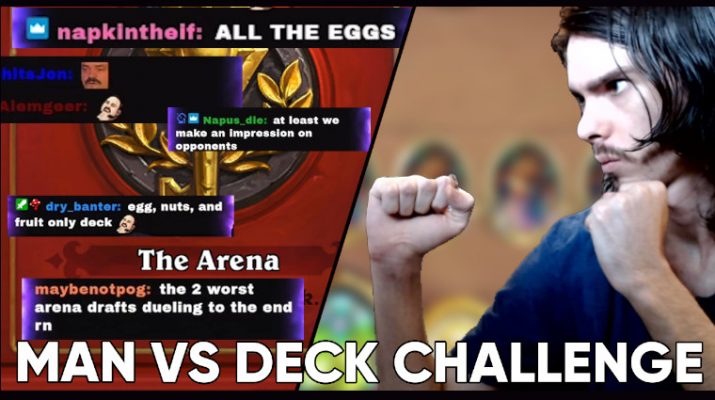 Introduction
Today, I am starting my “Man vs Draft” series, where one of my viewers tries to draft the worst deck they can (with a few exceptions), and I try to see how many wins I can get. The goal for “Man” is to go at least 3 wins and break even with the maximum amount of losses, otherwise man has lost to the deck. What inspired me to do this was a series of unfortunate events that ultimately ruined my streak for the arena leader board, and a viewer that had offered to pay to “sabotage” my run for entertainment, essentially. I was so fed up at that point that I figured I would blow off some steam with a fun challenge for some extra cash, but now it has evolved into its own saga! For those unaware, Blizzard takes your results at the end of a 2 month cycle, and calculates your average amount of wins over your best consecutive 30 for the arena leader board.

What happens when a viewer drafts a bad deck for me?
They say “to make an omelette, you need to break a few eggs.” Well, this viewer made me pick every “egg” card that was offered, and it lead to a not very tasty omelette. All they cared about was making that work. At least I got some bacon with the eggs in the form of Elwynn Boar. It was still terrible. But at least the Witch’s Cauldron made for a lot of fun moments as well. Here’s the list we ended up with.

Gameplay and Results
This kind of challenge that separates the children from the adults. I had to think of every zany synergy I could to pull out any kind of results. Here’s an example of what I mean. In a certain game, I won by the skin of my teeth via a combo of Anubisath Warbringer, Witchwood Apple, and Lunar Oracle to make a board of 5/5’s. I was ultimately only able to pull out 2 wins with the deck…. In other words, man lost to the draft. Every game I played came down to the wire, not just the matches I won. The viewer was kind enough to draft me a few good cards, but they just weren’t enough. Here’s the video if you’d like to watch what a bad breakfast in Arena looks like.