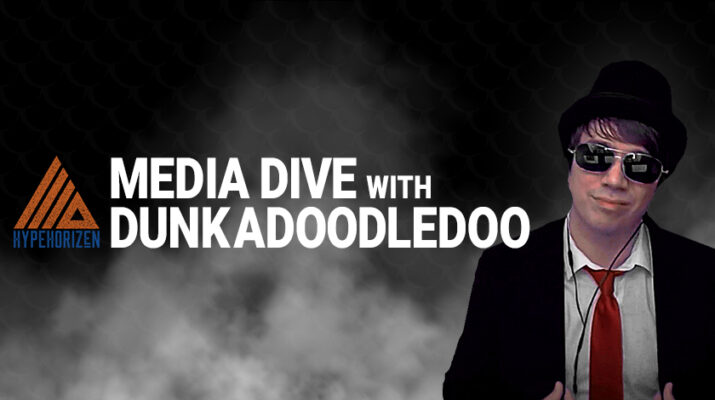 When we introduced Dunkadoodledoo, we said said his level of energy and hype is beyond comprehension. Well, Thursday we sat down with Dunk, which he rarely does for more than a few minutes, and attempted to find out the secrets to his content and the source of his energy.

I have no idea how it started. I just decided to show people ‘oh ya, I can do this.’

It was a channel redeem for a little bit, but I turned it off because it was just getting old. People just kept redeeming it, so [I’ll] save it for a special occasion or something.

I also have like sound redeems. You know the stupid Trololo song? Like two nights ago, I had about 50 redeems of that in a row. I’ve got hula time, push ups, run to the end of the room and back; that’s a popular one. Recently, I’ve had to put the price up because my channel’s growing, right? Sometimes it feels like all I’m doing is running backwards and forwards trying to play Hearthstone at the same time, at a decent rank. It’s like extreme Hearthstone. To be honest, I probably need to make some new ones.

I think I was kinda drunk one day on stream; it all starts off with that, right? I just decided to freestyle rap for the viewers and I was pretty bad.

One day I was like, ‘you know what guys? I’m gonna make a rap.’ Just did it for a bit of fun. I had help with a couple of lyrics from Matt Wilven, but most of it was stuff I thought of. A friend of mine who I met through Twitch, VRPNT, his job is like making videos for people and he’s helped make music videos and stuff. He’s got equipment on his computer that emulates $30,000 worth of music equipment to mess with stuff.

I’ve only ever completed one (now two) 24-hour streams. I’ve done three (now four) in total. I got up to about 21 hours in one, then my internet went off. I think I got to 21.5 hours on another one and I was way too [tired]. The other one I managed to complete.

I’m gonna be doing one this weekend (last Saturday). I’m raising money at the moment for the ICU unit in the hospital in my town because my mom’s an ICU nurse. My donation goal is $1,000 by Christmas, which I started it about a week-and-a-half ago, maybe a little more.

People from my chat kept asking me what I wanted for Christmas and were like ‘set a donation goal.’ I don’t really like setting donation goals ’cause, I don’t know, it just feels a little weird. I did it once, to get my wife a karaoke machine, that was about $160, $170. That was by demand from my chat, and in three days, we hit that. So they were like, ‘well, what do you want for Christmas? Set a donation goal.’ I had to think and I decided, ‘well, I think it’d be a cool thing to raise money for my mom’s unit and the doctors and nurses.’

My wife’s loved by the people in my stream. They all like it when Ola gets on stream. I’ll let her play games at rank 200 Legend or whatever. You know, just for fun, even though she doesn’t know what she’s doing anymore. She did used to hit legend on the game, but my rank doesn’t really matter too much. She’s playing Teamfight Tactics right now.

Author’s note: the following is a conversation between Dunk and Ola.

She played some ranked games on my 24-hour stream. I think she lost four or five in a row, was it, Ola?

I don’t know what you’re talking about.

She says she doesn’t know what I’m talking about.

We’re usually in the same room when I’m streaming. Ola, how do you feel when you come in from work and you’re husband’s just doing some crazy stuff on stream?

She said ‘I don’t know’ and laughed. Do you think I’m crazy?

Like super crazy. Okay. But she knew what she was marrying [lol].

2 thoughts on “Media Dive With Dunkadoodledoo”