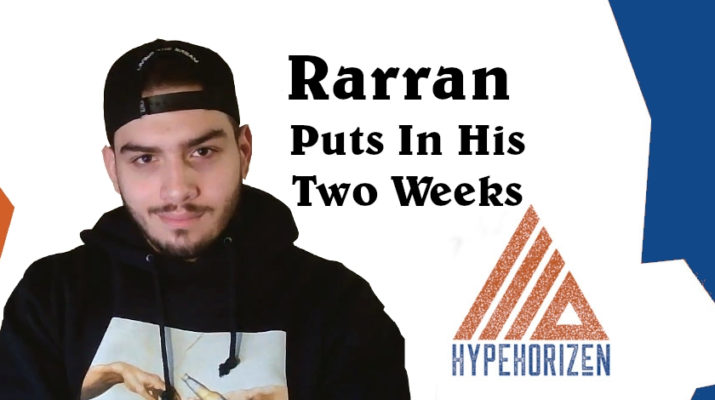 For over a year, Rarran has been balancing work and Hearthstone. Waking up at 6:00 AM, editing, streaming, coaching, social media and interviews, all on top of work for his quest to help people improve at Hearthstone. On Friday, July 17, that all changes.

“If you want something badly, you’re going to push as hard as you can for it, right?”

Rarran’s only card-game experience before Hearthstone was a TCG called Chaotic, a game similar to Pokemon, but you become the creature instead of training it. That’s also where he got his username.

When he was 14, he saw Reynad playing the Hearthstone closed beta. Pretty much immediately afterward, he went to the closest pharmacy, bought a prepaid debit card and used it to pay for access to the closed beta.

Rarran’s passion for Hearthstone slowly kindled in the background as a side game while he streamed League of Legends, and then Mario Tennis Aces for the Nintendo Switch. He got his first big break in the summer of 2018 through Mario Tennis, averaging about 75 viewers.

However, that fall he needed to complete his computer science thesis to finish university. As it was difficult to balance school with maintaining a fanbase, he decided to break from streaming until Feb. 2019.

Then, he took another risk.

“For everyone who wanted me to keep playing Nintendo games, I said ‘I’m not going to do it; I’m gonna play Hearthstone.’”

Since deciding to pursue Hearthstone, he also had to balance work and living away from his parents.

Slowly, he rebuilt his audience. He continued improving his stream and YouTube. He networked and collaborated with people like Dmoney and started offering coaching.

Maybe it was constantly looking at chat, or being genuine, networking or fostering improvement that led to Rarran’s consistent growth. However, one of Rarran’s greatest assets is his luck, or lack thereof.

“I’m a pretty unlucky individual. I resonate with Reynad quite a bit because he was the Salt Lord when it came to RNG and I think that rubbed off on me because there’s some plays that I’ve never seen happen to anyone else.”

Then, after years of aspiring to be a full-time streamer ever since he was “a wee lad in high school,” everything came together last month. In June, Rarran joined HypeHorizen. Meanwhile, his stream, YouTube and coaching began “popping off.”

After talking with a friend, Rarran decided to take another risk on June 26. He would stream from then until July 3, and if successful, he’d quit his job and pursue Hearthstone full time.

“I’ve been trying to do this for years. So I kept at it, and I’ve been working really hard at it, and it’s gotten to the point now where financially, it would be a slight difference from what my ‘real’ job is. Now that streaming’s popping off, and YouTube’s blowing up and there’s potentially more stuff coming, this seemed like a great opportunity to try doing it full time.”

Then on Wednesday, Rarran was certain he could focus solely on Hearthstone. His requests for coaching had exploded, his viewer counts remained consistent, he hit rank 1 and got officially announced on the Coin Concede Podcast.

The stage was set, and in the middle of his Friday stream, he sent an email to his boss titled “Letter of Resignation.”

“I still have to do the last two weeks before I leave, but after that, I’m free!”

2 thoughts on “Rarran Puts in His Two Weeks”