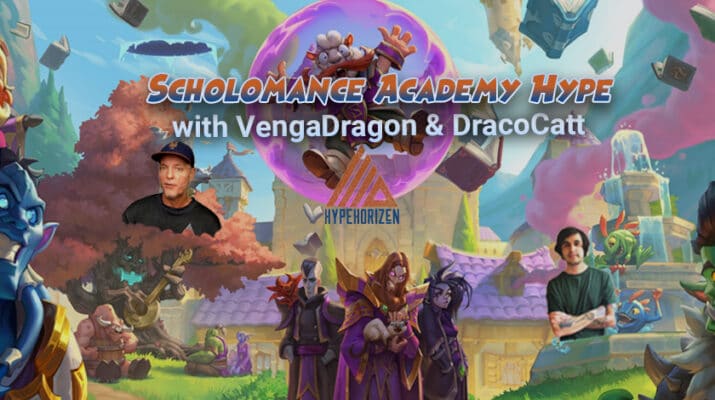 Scholomance Academy is set to release Thursday and HypeHorizen is, well, hyped! We sat down and interviewed streamer DracoCatt and founder VengaDragon to find out what they’re most excited about. Here’s what we learned:

“I was having a conversation with my fiancé about how I’ve never been more excited for a Hearthstone release. I asked her if that seemed typical, and she told me it did. That made me realize that it’s hard for me to express how excited I am for this specific set of cards that is coming out because I’m generally so optimistic and stoked on the game. It’s hard to calibrate how much more I am this time.”

DracoCatt said the direction Hearthstone’s going is one of the things he’s most excited about. He played Yu-Gi-Oh! until the end of high school, and cards like Glide, which has the ability to discard your opponent’s hand, are reminiscent of Yu-Gi-Oh!’s hand manipulation. He’s also excited that Scry from Magic: The Gathering is being incorporated to Hearthstone through cards like Sphere of Sapience.

“The whole concept of Scholomance is hand manipulation, right?”

DracoCatt is a Demon Hunter specialist, almost exclusively playing that singular class on stream. He loves building different archetypes, decks, and adding random cards to make it work. One of his proudest Hearthstone accomplishments was hitting rank 319 legend with a unique take on Demon Hunter.

“It wasn’t even a meta deck after Warglaives was nerfed. There are no stats on it on the internet, but I just spent so much time with my Discord community and my friends. We made this deck that didn’t exist work.”

He said because the control deck did so well in spite of constant nerfs, the Soul Fragment mechanic is what he’s most excited about. Cards like Shardshatter Mystic, which deals three damage to all other minions for three mana, so basically a “better Duskbreaker,” play well into the control theme. Then there are combos like Marrowslicer on 4 into Soulshard Lapidary on 5 to deal 13 face damage over two turns for a bit of pressure. And finally, Soulciologist Malicia to summon a bunch of 3/3 Rush Souls as a finisher. Control by the way.

And finally, since Scholomance Academy is basically Hogwarts, DracoCatt intends to play Hermione Granger in every deck no matter what.

“Demon Hunter got Hermione; do you know about this? It’s Star Student Stelina, and we’re going to be bringing her on every single game. I’ve played more Demon Hunter than 99% of Hearthstone players. I know all of the cards and the way discovering works with the class so well that usually I’m able to take [an archetype] that’s suboptimal, like Control Demon Hunter, to a very very high rank. That’s because I’m so aware of the other classes’ weaknesses to specific Demon Hunter cards. So this card, whether or not it’s good or it’s bad, we’ll be bringing it in every single game because we are so aware of our opponent’s deck in the way that I play Demon Hunter, that this card is going to probably win us a million games on stream.”

There’s three types of minions VengaDragon likes: big minions, minions that generate cards, and “DRAGONS BABAY!” So, when he found out about Onyx Magescribe, his fantasy of an “Almighty Unicorn Dragon Paladin” may make an appearance on his stream.

“I’m a big-minion guy and any minion that generates cards is a card I like. It allows me to run less spells and drop big answers and this card may give me something for next turn. It’s especially strong when combining it with Frizz Kindleroost. GIVE ME DRAGONS BABAY!”

VengaDragon is also looking to build some iteration of Control Shaman and Quest Heal Druid.

Now, you may be thinking ‘hey, those are some expensive decks!’ They sure are, but with VengaDragon’s patented Bigger Better Faster Cheaper™ Dust Guide, you too can collect every card from the expansion.

“I play all kinds of crazy decks. The bigger the minions, the better. Control Shaman will be a thing; Quest Heal Druid might be a thing and Dragon Paladin will be my thing: it won’t win a lot, but I’m going to jam it because I’m dragon-obsessed. My goal is to get every card using my method explained in the YouTube video. I practice what I preach, I just wish I hadn’t broken out in hives before recording that one.”

Although playing with new cards is nice, sometimes it’s nicer to watch your family open their toys instead.

VengaDragon said he’s more happy about what Scholomance has done for HypeHorizen and what it will do once it releases.

“I’m so happy for all of the people involved; I’ve seen them grow and I want to continue to help them succeed. We have the best players I know and I’m excited to see them get high Legend. From a business standpoint, it’s given us a ton of traffic from our bundle giveaways. My heart and soul is in HypeHorizen; I work on it nearly 12-to-18 hours a day. This is truly a dream come true for me.”