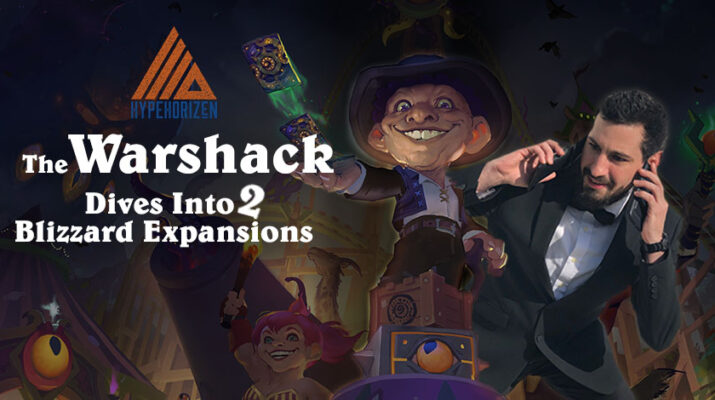 This month, Blizzard released a myriad of content, including a Hearthstone and World of Warcraft expansion, both within seven days of each other. Did you know they made an MMO off the card game by the way?

Anyway, a lot of HypeHorizen teammates have been diving into this juicy new content. Among them is TheWarshack, who’s been streaming both games, uploading budget deck guides and podcasting every Sunday at 1:00 PM EST.

“I’ve been trying to sleep more recently, but like the first week of the Hearthstone expansion and WoW [expansion,] I streamed like 12 to 15 hours multiple days in a row. It was a lot, but I got a lot done, so that’s good. In Hearthstone, I’m Legend, which is good. In WoW retail, I’m already max level doing the hardest content in the game. I’m tanking, which I’ve never done before. In WoW Classic, we’re doing the hardest raids in the game. We’re playing at the highest level in three different games, which is a fun thing. No matter what I switch to, it’s at a good, challenging point.”

Madness At The Darkmoon Faire

Warshack usually streams about 80% Hearthstone and 20% other games. Now, it’s more like 50/50, and not completely by choice.

“A lot of people are still upset at the Battle Pass, so it’s really hard to tiptoe around that… The Reddit is a dumpster fire. Every post is hate, or a rant, or a complaint. A lot of people are upset at the Battle Pass. With all this negativity around Hearthstone right now, a lot of streamers are getting attacked by viewers or just the community as a whole. Like ‘how can you support them still? Why don’t you speak up? Why don’t you make a video? Why don’t you yell at Blizzard yourself?’ A lot of content creators and people on stream are in a pretty uncomfortable spot ’cause if you don’t stream, that’s what I do for a living; I stream. I make Hearthstone videos. So if I don’t play Hearthstone, I don’t do Hearthstone, I don’t get paid. That means I don’t eat.”

“We do voice our opinions, but you have to understand content creators, we don’t decide what Blizzard does. We have little to no sway, authority or power… It’s been a fine line to walk with people being very aggressive and keeping an upbeat attitude while playing Hearthstone right now.”

Despite getting occasionally caught in the crossfire, Warshack and his community have remained relatively hopeful and positive.

“My community’s pretty like ‘this is how we feel; we hope it gets better.’ What I tell them is basically Battle Pass, it’s fine. Getting some upgraded way to get experience to do daily quests and to achieve rewards through playing Hearthstone is fine. It needed to be updated; it needed to be updated five years ago. This is something every game literally does. It’s how you continue to get players to play the game, by rewarding them for playing the game. But the way that they did it was pretty awful… But, I have a positive outlook.”

On top of streaming from dawn to dusk, Warshack also dedicates time to create budget decks for the discerning free-to-pay gamer.

“When I play over 15, 20 games, and we have above a 55 to 60% winrate, I consider that to be pretty good. I know some people will just build a deck. They’ll play 20 games; they’ll win five, lose 15, take two games out of the winning of five, whatever the best two are, post it up and call the deck amazing. That’s unfortunately what happens a lot of the times and I just can’t do that because I know people craft this stuff. People go, they look at these decks and they go ‘ok, he says this deck’s good,’ then they have to try it, right? They build it. They spend their money and they build the deck and they want that deck to be good because if not, they wasted their money, and they wasted their time, and nothing happened.

I make a point that every time I build a deck, if it’s not above a 50% winrate, I don’t post it. If it’s a deck that I know is just a meme, you’re gonna lose more than win, I clearly state that at the very beginning. Like ‘hey guys, this is a fun deck, not a good deck. You’re gonna have plenty of fun. You’re gonna win some games; you’re gonna lose most, but that’s ok ’cause we’re having fun.”

His recent decks and this Hunter deck are no exception. Warshack went through the the top five Hunter decks, cut out all the legendaries and epics, and got a spicy and successful Hunter deck for just over the cost of one legendary.

“The most expensive card in the deck is three mana, so if you can manage not to have a turn-one play, you shouldn’t even be playing Hearthstone [lol]. We went up like 2,500 ranks in an hour. The games are over in like three minutes. You either win by turn five, or lose by turn five.

So I have to explain to the Hearthstone players what WoW is and what it looks like and they’re like, ‘well, what’s the point of the game.’ ‘Well, you know? To level up and get gear.’ ‘What does that mean?’ ‘What do you mean what does that mean?!?’ It’s interesting that people that play Hearthstone have no clue and WoW is a completely unfathomable game [to them].”

Warshack’s been enjoying streaming World of Warcraft with his roommate. They have a good arrangement: Warshack tanks and his roommate heals. However, that doesn’t always go so smoothly.

“I’m a tank and it’s been tough because tanks and healers are the most important people when doing raids and dungeons in WoW. So it’s me and the boss one-on-oneing while the healer makes sure I don’t die, which is my roommate, and he let’s me die, because he’s a [expletive]. He’s like ‘all right Rob, you got it from here. I think I’m gonna take a break.’ ‘Take a break? I’m fighting the boss!’ But it’s all in good fun.”

Warshack plans to go back to mostly streaming Hearthstone, but for now, you can catch some more frequent, intimate WoW streams before the full-time Hearthstone grind resumes.