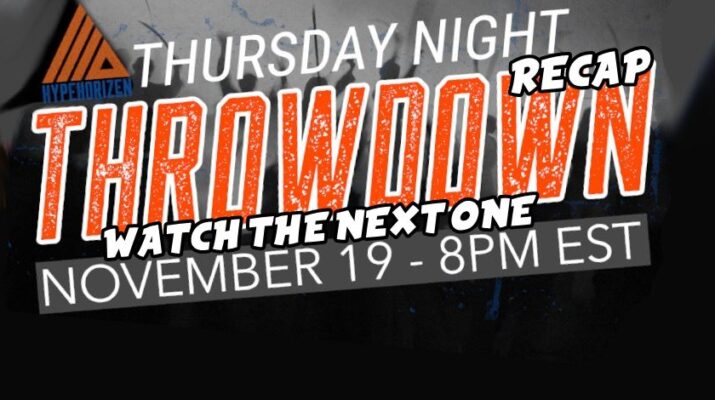 This Thursday, Nov. 19, at 8:00 PM EST, HypeHorizen will host its second community tournament. Before that, we wanted to review our last Thursday Night Throwdown.

“I thought HypeHorizen would make tourneys even before it happened. I think I asked Dmoney in the Metabrealers Podcast with TheWarshack and DracoCatt, I asked him if HypeHorizen would make a tourney in the future and he told me ‘oh; watch out because soon we are going to make one.’ I was really hyped because I didn’t know [HypeHorizen] was planning to do it, but I wanted it to happen.”

MPV first heard about HypeHorizen through Dmoney. He alternates between a handful of the team’s streamers throughout the day and eventually joined the Discord. He saw the tournament announcement there, and as he said, he was hyped.

“I’m kinda new because I only played like two or three qualifiers and a small tourney… I felt really good because as I said before, I’m kinda new to the competitive environment, and in [Thursday Night Throwdown], there were 16 people. It was a small tourney, but it doesn’t mean that the competitive level was lower than others. What I’m trying to say is that even though there were 16 people, it felt like I was playing against more competitive people than I’m used to playing against in ladder. I liked it. I think after the tourney, I [started] making better plays.”

MPV admitted one of the main reasons he started competing in tournaments was to win free packs. Fortunately for him, he placed second and won seven Scholomance Academy Packs.

Yesterday was an amazing day competing in the HypeHorizon Thursday Throwdown tournament; sponsored by FIFINE! . I was cast as the first match of the night, and I was so excited! I didn’t win the tourney itself, but my plays helped me prove to myself that I have overall become a much better player! . (PS I am shown as the opponent in the recording, because I taped the recording from the point of view of the caster of the match, @dmoneygram ! . Thank you all so much for the encouragement, and I am excited to see you all in the tavern!! . #hearthstone#hearthstoner#hearthstoneplayer#hearthstonecards#blizzardentertainment#wow#gamer#gaming#gamerboy#videogames#fyp#foryou#foryoupage#hypehorizon

“I really encourage people, even people who are new to tournaments, or even new to the game, Hearthstone itself, to interact with the tournaments. If not play in them, at least watch them and see how these players, how they have their own styles with their own decks and see how these other casters react to it. You can use that experience, even if your deck isn’t exactly the same.”

Kalliwiz started playing Hearhstone toward the end of The Grand Tournament and became more competitive one or two years ago. Then, he stumbled across VengaDragon.

“Last November I’d say, I stumbled upon VengaDragon on Instagram. He invited me to come check out his Twitch channel for Hearthstone because I was posting content… I jumped right on that wagon and started watching Venga, and that introduced me to GuyGrumpy, and Dmoney, and all these other awesome streamers who eventually came together to create [HypeHorizen]. I was super excited about it because I just started playing competitively. I got all this new advice. I thought ‘why don’t I stick around and see what else I can learn.’ It lead me to the seeing the fact that they were bringing in other people and you had the ability to join the team. That was something that, once I started playing competitively, I always dreamed of doing: being part of a team and [seeing] how much I could learn from that.”

Kalliwiz took a brief break from Hearthstone in August. It was a combination of blowing all his dust on Libram Paladin and the meta not favoring him. But now, it’s a Kaliwiz meta. He’s got a tournament to boost his motivation and a dream in his sights.

“I know I’m not the best at [Hearthstone]. My results from the tournament state that very clearly, but the fact that I even got as far as I did in this tournament is a personal triumph for me. I was able to at least put up a good fight even if it was just a small tournament. It was big for me and it was a great encouragement for me to make sure to get back into the game regularly.”

Kalliwiz said his dream is to become a popular Hearthstone influencer, join a team, and somehow mix that all in with his passion for culinary arts. Who knows; he could be the Gordon Ramsay/ Bobby Flay of Hearthstone.

We’ll certainly host more tournaments and keep the Discord open for him to grow!

Thursday Night Throwdown is a periodic community tournament hosted by HypeHorizen. It’s online, free and open to anyone with an Americas account, including you! You can find more information here or register directly on the Battlefy here.