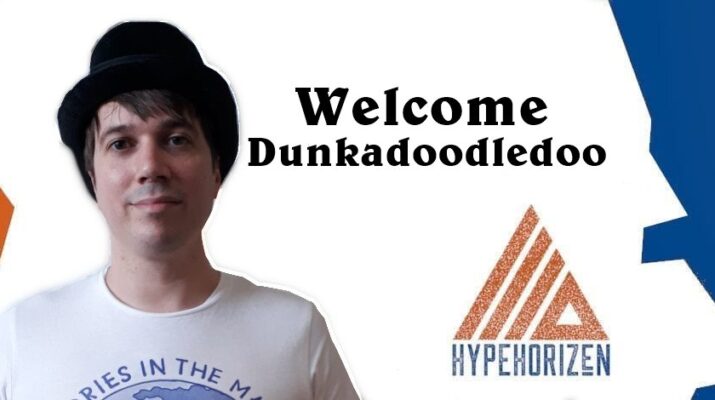 There’s energy, there’s hype, then there’s Dunkadoodledoo. He’s been known to use some choice UK language and run around his room, as concisely demonstrated by his friend, RumhamHS. We don’t always know what’s going on during his streams, and have no idea what’s happening in any of his YouTube videos, but we’re excited to welcome him nonetheless. We do however advise readers not to try most of what Dunkadoodledoo does at home.

Hello everyone, I’m Dunkadoodledoo and I’ve been playing computer games since I was very small. My first console was a Sega Master System. I got into online gaming and whenever I played any games, I’ve been very competitive. I met my wife playing a MOBA. It was a Russian MOBA called PrimeWorld. I was the leader of a guild called Hugs and Kisses and we were the best guild on the EU server. There was a top-25 page, and we had like 20 of those spots.

For card games, I started dabbling in Hearthstone four, five years ago. Maybe two-and-a-half years ago, maybe three years ago, I really started playing a lot. I was going rank 5, rank 1, hit Legend, and I couldn’t believe it. I said ‘oh, I’m actually not that bad at this game.’ I continued to play the game and be at quite a high level for the past two years. I’ve got multiple top-200 finishes. My best finish ever was like rank 23 and the highest rank I ever hit was rank 4.

I think it takes the fun out of it a little bit if you get real competitive. At the same time, I’ve got respect for people who do play competitively because they put a lot of time and effort into it, even checking out decks and what alterations can they make, looking back at games, things like that, but I don’t do any of that.

It’s just nice to be part of a community. I know DmoneyGames, I know DracoCatt, I know GuyGrumpy; they’re all nice people and I watch their streams.

Everyone plays Hearthstone, so you can get more involved with the community and meet these other Hearthstone streamers and I know they’re organizing community games. That’s what I wanted to a part of: a community that gets to play games with other people who are on the team and things like that. It’s all about the uh… the communityness.

How do you think up the content you make?

For my YouTube, there’s all kinds of weird shit on my channel. I never made normal videos. There’s songs; I made a song about Shudderwock. It never really took off, but maybe when I hit partner, I’ll start making weird stuff again.

[For my stream,] it’s just a fun place to be in. I’ve got a Murloc onesie. There’s a channel redeem for eating Reaper Peanuts; I’ve got one for eating those disgusting jelly beans. If you ask around, I’ve got the best channel redeems, I do.

It’s the community man. The people who are in your chat day-after-day making you laugh. What can be better?

I’m just sitting there playing a computer game with my friends. Even after stream, we’ll get together and play games.

I also don’t get too many trolls either. They just keep away I guess. Or they get a timeout and don’t come back.

I’ve got a streaming idol: Kitboga. I love watching that guy; he’s fantastic. He’s like my favorite streamer by far.

He calls scammers for a living and messes with them. He’s an absolute computer whiz, so he gets people to log onto his virtual computer. He’s made like fake bank accounts and things so scammers really think ‘oh, this guy’s loaded.’ He just messes with them and some he keeps on the hook for days.

I’d love to be able to do something like that, but I’m not a computer whiz.

I did however have someone call me the other day to ask about if I was in an accident. You know, these dodgy insurance people. I had the guy on the phone for like 10 minutes winding him up and chat absolutely loved it.

It was on stream and it’s happened a couple of times. My chat absolutely loves it. I put them on loud speaker and mess with them until they realize I’m taking the piss.

Nope. Nothing appropriate at least :).