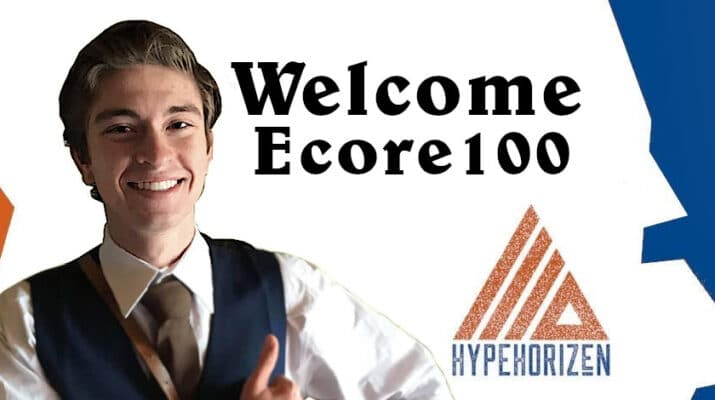 HypeHorizen is honored to help Ecore100 achieve one of his dreams: to join a growing esports organization. He’s passionate about teaching people and watching them prosper. When he said one of his ultimate goals in gaming was to grow with an org, we were happy to facilitate that aspiration.

Hey, I’m Ecore100 and I fell in love with gaming when I was probably 10. The first game I played, like actually played, was World of Warcraft with my dad. I played for two years and I played a lot. It was just so wild to think that this was a giant open-world thing. This was the first big game I played and I was like ‘this is what gaming is actually like?’ Then there was really no turning back after that.

Eventually I came across Hearthstone. I played Magic The Gathering and Yu-Gi-Oh! years before and I loved draft in Magic, and arena in Hearthstone is very similar to drafting in Magic. So I got a beta key and started playing as early as I could with my dad because we both played those card games together.

In college, I found someone else who played Hearthstone and got in an argument on if you can play and get to Legend, or at least rank 5, on a full budget. I got to rank 5 way back when as a free-to-play player and he dared me to do it again. While I was doing it, I decided to record videos because that’s what I did a couple of times with League of Legends to see if I made misplays. I said ‘this is cool. What am I gonna do with the videos? I’ll just post them on YouTube.’

Ever since then, I’ve played Hearthstone for YouTube, ever since that one little challenge.

I stream Hearthstone and Teamfight Tactics.

For TFT, I play that occasionally. Usually when a new set comes out, I’ll grind. In set 4, I’m definitely going to go for Diamond, maybe Master, and probably make more content on that.

I want to be good at a game before I make content for it. In Hearthstone and what I plan on doing for TFT is to talk about all of my decisions, help people learn and entertain them.

What are your thoughts on joining HypeHorizen?

I was talking to VengaDragon before the team even became a thing. I was talking about how one of my dreams was to either start or be in the beginning of a new org.

He ended up doing it and I think I did actually call him a madlad or a madman, or something like that. And that is why I’m here now :).

It’s been a dream of mine to join an org and be a part of its growth. I don’t want to just grow myself. I want to do as much as I can to help the organization grow. Also being a part of an org and having people that you can bounce ideas off of or do collabs with is super cool to me. Everybody should succeed, you know?

What made you want to pursue YouTube full time?

I raided someone recently and they said, ‘oh. You’re Elemental Core; you made the Nerf Holy Hand Grenade!’ And I was like ‘that’s not what I want you to know me from.’ But he said it’s a classic.

That video was both the catalyst that started this, but also the thing that made me quit in the beginning. This video, along with my early stuff… people would make fun of my voice and call me a squeaker. I was like ‘I don’t want to have to deal with this on the internet,’ so I quit.

I deleted all my early videos except this one because at the time, it had like 50,000 views.

It had always been a dream of mine to do this because I love games and I always wanted to create content and entertain people. Eventually, near the end of high school, I got a notification like ‘your account is going to get demonetized because you no longer meet the requirements and you have like $500 in the account.’ I was like ‘what do you mean I have $500?’ And I looked and this video has like 500,000 views.

After I made all the recordings to look at my gameplay, I was like ‘you know what? This could be really cool ’cause I could meet the requirements and I already have this video as a catalyst to grow from.’

Right before the beginning of this year, I started growing a lot. My channel had been growing fairly steadily and all of a sudden it just took off. And there’s no real reason; the amount of growth I had per week just quadrupled. Then COVID-19 happened and I had an opportunity to actually put time into it. I was like ‘you know what? I’ll just do it. I’m never going to get an opportunity like this again.’ I guess I always was kinda consistent, but the atmosphere changed from a fun little hobby to ‘oh shoot, this is real, so let’s take it more seriously.’

I’m older now, less self conscious. My voice cracks are very much still a thing, but it’s ok.

I’ve always liked teaching people. I tutored kids back in high school and I worked at a summer camp with kids and taught them how to play tennis.

Watching them get better at whatever subject, or sport, or game and having people comment to me like ‘without you I wouldn’t have gotten Legend or Diamond V,’ or whatever rank is just super cool when it happens.

It’s super nice to hear that. It just makes me smile. I don’t really know how to explain it. I just know that I impacted this person and that’s probably one of the coolest things about content creation and streaming in general.

Do you have a gaming idol – someone in esports or gaming you look up to?

The amount of effort he puts into all of this and the fact that he still had a full-time job is crazy.

Just watching him grow in general motivates me to want to grow too because he’s also having a huge amount of success and it’s cool to see someone that I know and I’ve talked to near the beginning of my journey also have success.

“There is no losing; there’s just winning and learning”

I try to tell myself that so I don’t get tilted when I lose. Losing physically is a thing, but to not have the mindset of losing and to try and focus on every loss as a learning opportunity is important.

I don’t know where I heard that, but I heard it fairly recently. I guess I haven’t lived by it, but ever since I heard it, I thought it was an amazing quote.