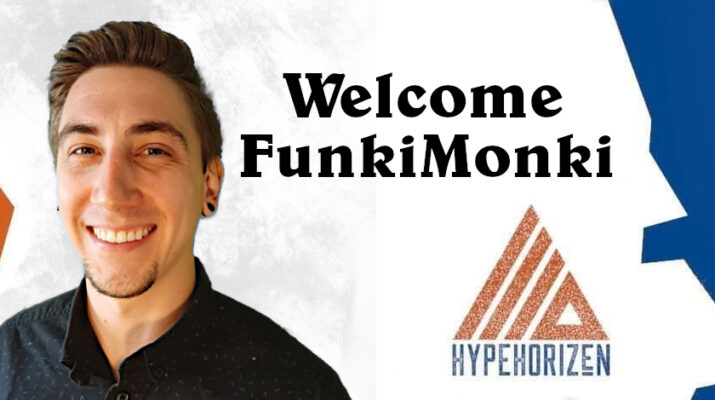 HypeHorizen is ecstatic to announce it’s newest member to the Stream Team: FunkiMonki. Since he’s picked up CCGs, he’s found a passion for building decks. Now, with Hearthstone, he wants to share his decks with as many people as possible and HypeHorizen is happy to help.

First off, my name is FunkiMonki and kinda my niche, my claim to fame, is I’m an off-meta, homebrew, deckbuilder. I’ve actually vowed never to play a tier-one meta deck on stream, or to create content on it. Everything is unique, freshly made.

I got into card games from a very young age. I started off playing Pokémon way-back-when, when I was in like first [or] second grade. And from there, it evolved into playing Digimon, from there Yu-Gi-Oh!, and then Magic: The Gathering. And so naturally when Hearthstone came out, I was interested, and I picked up the beta release, and I’ve kinda been playing off-and-on since it was released.

I stream Hearthstone, and as far as getting into it, I’ve been involved in card games pretty much my whole life. But Hearthstone has always been appealing to me because it’s very easy to get into. The big animations, the big numbers, the colorful screens, it’s just very aesthetically pleasing, and there’s still enough content in the game to keep me busy every single day with making new decks and whatnot.

Also, I just feel like I’ve been able to have the best kind of success with making decks in Hearthstone, more than I have in any other game before.

I first heard about HypeHorizen and got involved because I’m very big into networking with other communities on Twitch, and a lot of the communities that I’m involved with on Twitch, a lot of the great content creators that I watch, I noticed, started to be a part of this team. I first heard of it through Dmoney, and then TheWarshack, DracoCatt, and I noticed a lot of the communities that I was involved in started to join this team. They all have simlar goals as me, as far as growth, and as far as the content creation, so I reached out and the rest is history.

I first started streaming, and it was just streaming when I first started, and then after doing that for a while, I wanted to share my decks with as big of a community as possible. So I started to share my decks on social media sites, like my Twitter, my HearthPwn, other sites like that, and then I thought ‘let’s hit the biggest one, let’s hit YouTube.’

A similar goal that I have with the organization is to grow as much as possible as I’m sure it is all the other members’ goal as well. And not only that, but also to give some of my expertise back to other members as well too, all the things that I’ve learned in the couple of years of doing content creation.

How do you go about building decks?

I build decks to give back to the community, get more variety, and it’s more of a challenge to myself.

I always like to play these card games against my friends. Not to sound too conceited, but I was usually the best player of [my friends]. So at a certain point, it was less challenging to beat my friends, and it was moreso a challenge to beat myself. If I could beat them with a certain deck, I would put that challenge upon myself to make a deck better than the last one that I made.

As far as how I create these decks, honestly, it’s just a lot of practice with me building my own decks since I was like eight years old. Doing it for so many years, you kinda get a knack for it. But, I start with an idea; that’s really how every deck starts. It starts with a very simple idea. From there, I’ll go ahead and throw in some cards that help support this idea. Then I’ll throw in some more cards, I’ll take a look at the meta, and then throw in some cards that counter the meta decks, and then I’ll just throw in a couple of other maybe tech cards from there.

I try to create a different deck every day, or every other day, so I need a lot of ideas to be making all of these different kinds of decks. So sometimes if I’m having some crafter’s block and I don’t know what to craft, I’ll go through all the cards. I’ll just kinda stop and pause at a couple of cards that look interesting to me or maybe have some cool effects, and then base a deck around that and start from there.

Being involved in a lot of different communities that share the same interest as me.

Growing up, throughout my life, it’s hard to share these gaming experiences with many of my real-life friends, so it’s good to be a part of a huge community that shares this exact same interest, you know? They share this interest about not only Hearthstone, but building decks and being a gamer.

Two of the biggest Hearthstone streamers that are minor role models for me would be RegisKillbin and Dekkster. I think they put a ton of time into their content for very good, quality content. They’re also very consistent with their content, and they are also both off-meta deck players as well.

A lot of people think that it’s just enough to put your face in front of a stream and click the ‘go live’ button. But learning from these guys, it’s clear that there’s a lot more that they do behind the scenes and their content kind of follows a curriculum in a way. They’re very consistent as far as their schedules, as far as their YouTube videos. You can tell that every stream follows a certain pattern of the kind of content that they want from it at the start of the stream. They don’t just start a stream and go willy nilly through there. They kind of have an idea of the content they want to produce before they go live.

In traditional sports, you’re just doing, and you can think about things later, but with strategy games, you’re constantly thinking throughout the game. It’s very easy to beat yourself up over a specific play, or series of plays, and you end up playing better if you just stay positive.

Also, always tap last to assert dominance, ’cause I do it more often than I should on stream.