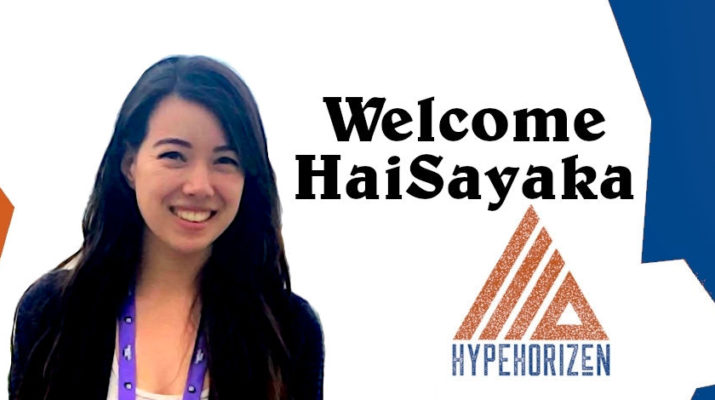 HypeHorizen is proud to announce Hearthstone player and streamer HaiSayaka to the Stream Team. She’s been known to frequent Open Cups, one-trick decks into high legend, and is well-respected among streamers.

Hi, I’m HaiSayaka, but just call me Sayaka. I’m 25, I graduated from college two years ago with a political science degree, and I’ve been seriously playing Hearthstone since Sep. 2019. I’ve been legend every month since. My highest rank was rank 11 legend with Combo Priest.

I found out about HypeHorizen from GamerRvg because when he joined, he excitedly told me that he joined an esports team and I was really excited for him.

What I really like is that I’m joining at a time where HypeHorizen is new. We’re starting from the ground up. I hope we all work together to grow, to have a lot of success together, keep streaming and expand our Hearthstone community.

I used to actually stream League of Legends back in 2014. I was Diamond IV.

Then, I started Hearthstone in 2016. My boyfriend at the time was playing Hearthstone on his phone because he played WoW. I downloaded it, we played together, opened packs together, but I was totally casual.

How do you balance work with streaming?

I work full time. Everybody keeps asking what my job is, but nobody knows :).

I will say that I work for the government. I drive home, stream for like four hours on weekdays and nine hours on my days off.

I basically drink coffee and just do it. I’m dedicated, so I try to manage my time. I just come home from work, stream, go to sleep and do the same thing tomorrow. For the last 30 days, I’ve only missed like two days. It pays off.

What’s your reason for streaming Hearthstone?

Hearthstone is a lot different than other gaming communities. Hearthstone is the only community that’s actually truly wholesome. There’s barely any drama, hate or negativity. People are really nice and really supportive.

That’s a big reason why I choose to stream Hearthstone as opposed to other games. That’s why I put in so much time and effort here, because the people that play Hearthstone and the other streamers are really good people. It’s great, you know?

I like Twitch chat, I like the community. It’s very wholesome and people are funny. I like when we joke around and laugh about the game or when there’s a crazy play and people laugh about it.

I like the Hearthstone community; there’s a lot of good people. I met a lot of different streamers and started co-oping with them. For example, GamerRvg and HotMEOWTH encouraged me to try Open Cups because I was doing so well on the ladder with Combo Priest.

How’s it like going from ladder to competing in tournaments?

I’m a firm believer that the best way to get high legend is to just one-trick something. Every month, I choose one deck that I like and I just one-trick it. I don’t play any other deck, I don’t change decks, I just master one deck.

That’s also a weakness though, because once you go into Open Cups, you can’t just master one deck, you have to master two others also. So I would basically choose decks that are similar to Combo Priest. I would stay away from control decks because I never liked control. I would just stick with something similar to whatever I one-tricked, that way the playstyle would be the same.

I was basically just one-tricking Combo Priest when I started doing Open Cups. I got top four at my first Open Cup. So I lost in the second-to-last round and then that’s when I realized it was pretty fun.

How do you interact with your community?

People like to come to me because I’m very honest and I talk about relationships, life advice and drama. I’m honest about my life and I think people like to see and like to engage with that.

I feel like I have a good wholesome group of people and we’re all very supportive. Streaming and my community have helped me move on from hardships and I think it’s a healthy thing for me.

I’m not sure. I’ve met a lot of different streamers. My first friend in Hearthstone was PizzaHS. This was in 2016 when he had only 400 followers and he didn’t even have a computer yet, so he was streaming out of an internet cafe. GamerRvg and HotMEOWTH like I said. Back in 2016, I watched HotMeowth’s stream to learn Freeze Mage, and in 2019, I watched GamerRvg to learn Zoolock. I started co-oping with Zalae and had a lot of fun. He featured me in several of his YouTube videos. I’m also friends with Cantelope and we both live in San Diego.

They’re all a bunch of cool, nice people.

In order to be the best, you have to be yourself. Just always believe in yourself and when people try to tell you something negative, don’t listen to them.

When I was in college, I was Student Body President and I was thinking about that time. I realized that nobody can help you but yourself. That the only person that can bring you success in life is yourself.

So at that point I realized nobody can put in hard work except for me. I put in the extra effort to learn and get better. Even when you’re getting help from a friend or watching a streamer, you’re still the one putting in the work.

HypeHorizen is a fast growing esports team as well as a stream team. We’re always looking for competitive talent as well as influencers. The company is open to working with up-and-coming streamers and players of all skill levels. If you have interest in joining HypeHorizen, please use the contact form here: Contact HypeHorizen.