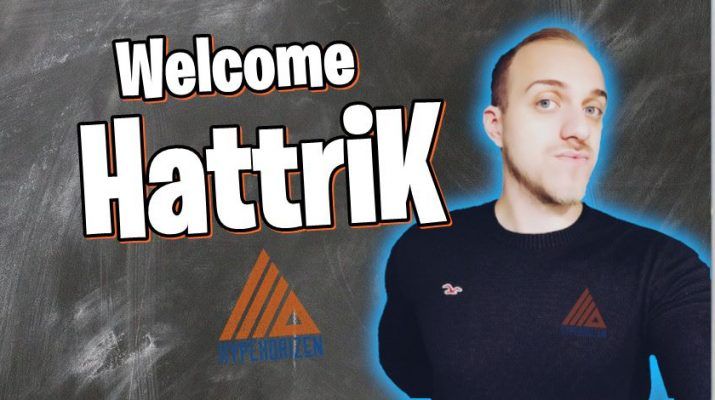 It is great honor and hype to announce that HattriK has joined Hype Horizen. HattriK will be wearing Number 03 on his jersey. We had the opportunity to catch up with HattriK and ask him some questions.

How did you first learn of Hype Horizen?

Well, it all started when I visited multiple streams and all of them had [Hype Horizen] in their title. It didn’t take me a lot of time to realize that it was a team and all those streamers were members of it. By that time I was just a small streamer trying to get into Twitch and find my place. DracoCatt’s and Dmoney’s stream were my favourite to hang out in. I learned a lot from them and they made me want to be part of Hype Horizen. This is one of the goals that I had in my streamer life and I didn’t doubt for a second when I got asked to join.

I exclusively stream on Twitch since I’m partnered with it. I love everything about Twitch and I can’t think in a better place to stream Hearthstone. We are lucky to have such a big and welcoming English community. It helps a lot when you’re starting to have role models to look at and I hope to be the same for the upcoming streamers and content creators.

I’ve always been a gamer. Everything started with Dota in Warcraft 3 and it’s been all down hill since then. I’ve played a lot of things in almost every platform, from PC to PSP and I rarely say ‘no’ to a good game. My most played game might be League of Legends.

In addition, I’ve played Yu-Gi-Oh since I was a child and used to spend a huge amount of money in real cards. I was lucky to have friends which also liked the same and we used to meet and play for a million hours. When we couldn’t meet anymore I started getting into digital card games and that’s how I ended in Hearthstone!

Well, now that’s a hard question. I’ve always had role models for every game. When it comes to Hearthstone I’ve been watching more streamers than competitive players. When I decided to become a streamer one of the first streamers I started to watch and learn from was Sezoklo and MisplayTV.

They made me switch from Spanish to English streams and I’ll always be grateful with them for it. In the next step I have to mention two of my favourite content creators which are part of this team. Dmoney and DracoCatt have been inspiring and key in what I am nowadays.

They both know how much I appreciate them! I’m not that much into competitive but some of my favourite players are Thijs, Frenetic, Orange, Gaby…

This one is easy! In my case, the best part of streaming is when a viewer says “Hey I had a terrible day but you made it better so thanks for it”. There’s no money in the world that can pay for that. I’m lucky to see it very often in my chat and that’s mainly what pushes me to keep going!

Another great thing about streaming is to create a community where everyone respects each other and we have a good time while playing games. Some of the members in my community don’t even play Hearthstone! A good atmosphere is key to feel comfortable while you’re streaming. I try to surround myself with the nicest people out there, so feel free to join if you’re a cool homie.

How does being a stream inspire you to do good?

I’m smiling and happy by nature when I stream. You would rarely see me being angry unless I get triggered because of the game. The whole point of my streams is to make people forget about the problems that we all have in real life and just have fun for some hours.

What game(s) are you streaming? What do you enjoy about them?

Hearthstone is what I mainly stream but I’ve always thought I could combine it with some other games. I’m pretty good at League of Legends and who knows, maybe one day I start to stream it as well.

What I love about Hearthstone is basically Hunter (the class), and the fact that I can build my own decks and climb the ladder while not playing what everyone else is. I’m a standard mode gamer and although I also like BG’s I don’t see myself changing to it in the near future.

It’s really hard to think in my “nemesis” within Hearthstone community. I like facing a lot of people but I love when it’s another streamer. I would say that the games that I most enjoy are against Norwis because we tend to laugh and be spicy with each other after every match. Norwis always scams me somehow and I think he’s really good at the game but I can say I’ve also won multiple times against him.

Do you have a Sidekick? If so, whom?

There are three people who I should mention here. MonadArt is one of my mods who has helped me a lot, in terms of improving and managing the stream. DracoCatt is one of the few streamers that’s always there and has answers to my questions. TheSuperiorDavid is a streamer who will always ask about me and how I’m doing, these kind of details can tell me he’s a great homie.

But that’s just a start since there’s plenty of people that should also be here, not as a Sidekick, but more as homies who have been there since start and I don’t forget how everything started and the support received.

The main goal will always be to have fun and inspire people to start playing or come back to Hearthstone. I’m here to entertain. My stream must be a place where everyone joins in order to have a good time, learn how to play the game correctly or become a Hunter Master!

On the other hand, one of the things I most like is helping smaller content creators to grow. I can see myself in them like if it was a mirror and I know that start is always hard. I’m aware I might be a role model for some of them so if you’re reading this right now, bare in mind that constancy and perseverance are the key words you should follow if you want to be a content creator.