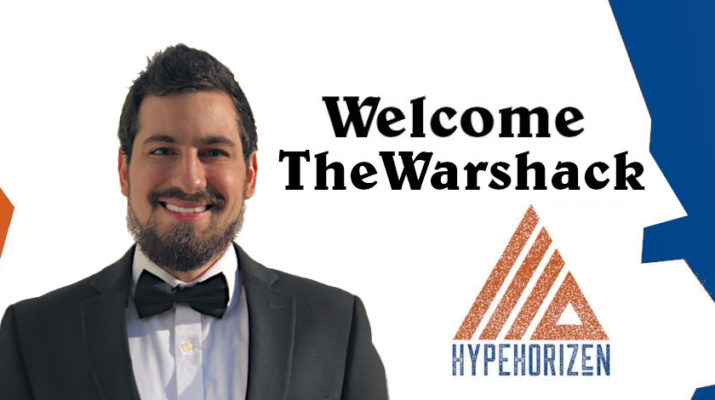 HypeHorizen is proud to announce Hearthstone player, YouTuber and streamer Warshack to the Stream Team. He’s been known to play wacky budget decks into legend, has 1000 wins with every class, and has been partial to control in Yu-Gi-Oh!, Magic, and now Hearthstone.

Hello, I’m Warshack and I’ve played video games since I’ve basically been able to put my hands on a keyboard and mouse.

At 10 years old I dove into Halo, and I played pretty competitively. I went to a bunch of small tournaments and I won things like 50 free wings at restaurants.

I had started with Yu-Gi-Oh! That drove me into Magic and Pokémon which eventually led me into Hearthstone. When WoW created their card game, of course I needed to give it a shot. I got the alpha invite for that.

I’ve never taken myself as a competitive player because that’s just not me. I like doing well, but I’m not going to play a tier-one deck. I’m gonna play some off-brand deck and I get satisfaction from that. If someone else is playing a tier-one deck and I’m playing a deck that doesn’t exist, and I beat them, that’s the satisfaction of ‘holy crap, this deck just beat the best deck in the game.’

I always normally head back to the strategy games, the card games. I tried Legends of Runeterra as well, loved it, liked the animations, but it just doesn’t pull what Hearthstone does.

I’m still not bound to Hearthstone. I stream WoW Classic twice a week as well. I’m gonna stream retail when Shadowlands comes out, so I’m not bound by Hearthstone at all. I mean, I can’t just stream one game.

Dmoney had introduced this podcast idea: a Hearthstone podcast every Sunday. One of the days after the podcast, he texted me pretty late, and he was like ‘hey, I got a question for you. You know, I’m starting a team and I really think that you’d be a good person to join us. You have the personality and you definitely have the spirit for it.’

I thought about it for like a month, month-and-a-half, and I thought Dmoney’s on the team, DracoCatt’s on the team, a couple of other people I know are on the team, they’re a bunch of good guys. I don’t see anything bad that can happen; I’ll be hanging around a bunch of dudes who like Hearthstone as much as I do. I’ll be able to bounce ideas off them and whatever they say is of high value. They’re a fantastic group of players that all bring their own unique style and creativeness to the team.

Now I have an outlet where I can connect with these cool people and now it’s not just me, but me behind all these different personalities.

How do you go about building decks?

When I’m building a deck, and I have an idea for a deck, basically what I tell the chat is you have to lay a foundation, just like anything.

So we got our house, and in order to build a really nice home, condo, whatever you like, apartment, you gotta start with some concrete, and what’s the concrete? That’s gonna be your core parts of the deck and how you win a game. If you have no win condition, your deck is just a styrofoam piece of [redacted].

Once you get the foundation, you’ve laid the work, you let it set, we gotta clean this place up. It’s gotta have curtains, good couches, we have nice carpet or tile, or even some marble flooring, and these are your spicy hot techs like Black Knight and Hungry Crab.

After it’s done, I test it, and I kinda hone in and focus on which parts of the deck worked and which didn’t and then I start tweaking from there. And then after 50 to 100ish games, we tweak it a bit more, and now we have a deck that wins more than 50% of the time.

For me to post a video on a deck, I need it to win more than 50% of the time. I’ll never post a deck that wins less than 50% of the time after it’s hit its final stage. That’s because when people play off-meta decks and use their dust to craft it, if the deck doesn’t do well enough to gain them ranks, that doesn’t leave a good feeling in people’s stomach.

When you start off streaming, you make no money, and I didn’t get a master’s degree to make no money. I did want something out of streaming, and whether it was to influence people to like the game that I like, to teach someone, or to make someone laugh, those are things that I believe are important.

Also, if you look at why I’m joining the team, it might be why I stream as well. If someone comes into my chat and they meet another person, they can become best friends.

The only reason that would ever happen is because we both enjoyed the same game and we met online. Having the ability to do that, I think is pretty priceless. He’ll be a friend forever. That’s also where I got my profile picture; it came from one of the pictures I took at the wedding.

If I look at people who maybe aren’t who I want to be, but people I highly respect and would love to meet in the gaming community, definitely Reynad would be up there at the top.

He didn’t go to college. He went from basically streaming Hearthstone to starting his own team and organization which is now a huge force in the area of esports. He was able to navigate those waters and do things differently than other orgs. He was able to build a sustainable business in this very changing, volatile, and fast-paced industry that there literally was no benchmark for.

He’s a guy that no matter what day it is or seemingly what time it is, that guy is streaming some game. He’s always entertaining enough to have more than 10,000 viewers no matter what game he streams. I don’t know if it’s a gift, a super-giga-ultimate work ethic; maybe he’s turned into Dragon Ball Super Ultimate Form with blue hair. He just has the mixture of whatever mojo it takes to be the ultimate Twitch streamer. Whatever the formula is, he figured it out.

When I was working, I heard people say “that’s what I’ve always done.” If that goes through your mind on something, then you’re doing it wrong. Sometimes you gotta think outside the box; what’s the worst that can happen?

In terms of Hearthstone, I get this question a lot, ‘why don’t you play this card?’ Because you always have that card in the deck, so we don’t, and vice-versa. That’s how they always build it, so let’s not.