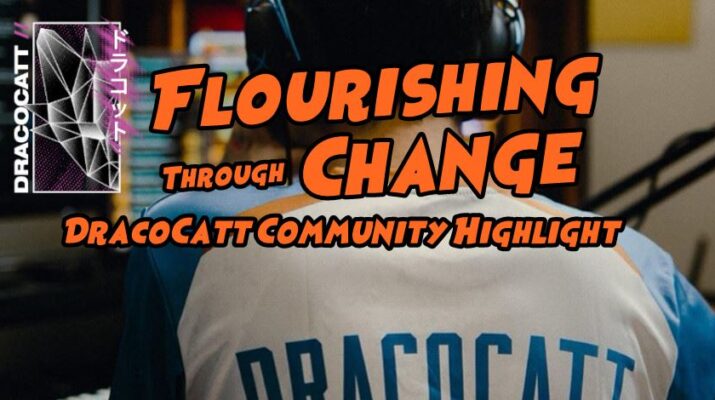 DracoCatt has gone from lead singer to a one-man show. From Hunter and Rogue to Demon Hunter. He’s welcomed change and his community has only become larger and more positive for it. He even made this cool shirt!

“When you’re singing songs and writing music, touring around and living in a van, going into these studios and standing on that stage and signing the autographs, it’s not relatable to people. You can act as normal as you want, but what you’re doing is still some kind of rockstar little dance. It’s all a show in the end. Streaming and Twitch is much more real so I don’t have to pretend like I’m normal because I am normal.”

DracoCatt said it’s much easier conveying normalcy when you’re a guy behind a webcam and mic rather than being in makeup, signing autographs after you’ve been the center of attention, a couple of feet above everyone else. Other than being somewhat distant from his audience, being a musician is far from tossing a coin to your Witcher and collecting sick ticket sales.

“When you’re on a record label, they basically give you this situation where you go in debt to them and they make all of the money off the initial stuff. You rarely pay back your record label for what they actually gave you. You’re kinda always in debt to them, so you don’t actually see [the] money.”

However, when one love dimmed, another flared up.

“Coincidentally, when I was transitioning out of music, I was falling in love with watching Twitch… It seemed like something that would be a good fit for me because I love to talk and interact with people. That’s kind of my favorite thing ever. I thought it’d be a nice creative outlet as well as a great way to give me that kind of fulfillment as performing did.”

DracoCatt said pretty much everything on Twitch is much more conducive to entertaining people, both for the streamer and the audience. If being in a band is like running a company with five different founders, Twitch is what most people think music’s like: watching a street performer and tossing a coin their way if you really like them.

Follow notifications, chat interaction, emotes, sub sounds are all more “real” than your album getting that 1,001st listen, especially when you’re not getting compensated for your work. Not only that, feedback is more direct and immediate. You don’t need to scream over a crowd; you can just type your question with an @.

“I really, really care about all of my community knowing how much I appreciate every single one of them and how what’s happened for me on Twitch and following this dream is all completely due to the support that I’ve gotten from the people that believe in me.”

Basically every major change DracoCatt’s made to his stream has been met with overwhelmingly positive feedback. Like his picture, he liked decks that were in your face, specifically Rogue and Hunter. A year after he started streaming, he found his new identity: Demon Hunter. It combined Rogue and Hunter and like many other streamers at the time, he wanted to become the Demon Hunter. However, unlike everyone else, he stuck to the class no matter how many nerfs were throw his way.

“When the new class was announced, it was the thing that everyone was gonna play. Thinking to myself ‘I want to be the Demon Hunter guy,’ it felt like I was one of many. But I’m so happy that after all of these months have passed, I don’t know anyone else who did the same thing. Most people that loved the class and were embracing it, strayed away from it when it got nerfed a whole bunch or when other classes became way more interesting.”

His Twitch’s and Discord’s reaction to him sticking with Demon Hunter? They loved it.

And It wasn’t just people who wanted the “freshest” Demon Hunter list. It was all types of players who flocked to DracoCatt’s community. He said that some may expect his chat to be filled with just Demon Hunter players, but he usually attracts players who love one deck, or one class, or even one archetype. None of his mods are even Demon Hunter mains.

Another thing his community shares in common is a minor distaste for Priest. But from his experience of playing the most-hated class for a time, Demon Hunter, DracoCatt doesn’t believe in hating on any one class or playstyle and imparts that onto his chat.

DracoCatt does his best to inspire the best in his community and really accepts everyone, even those plotting against him.

“A lot of people that watch me and are a part of my community don’t main Demon Hunter. Some people even watch it for the specific reason of learning how to play against it and I’m fine with that. If you wanna watch me play to learn what actually makes me lose, good on ya; that’s intelligent.”